Suzanne says "It was AWESOME!" 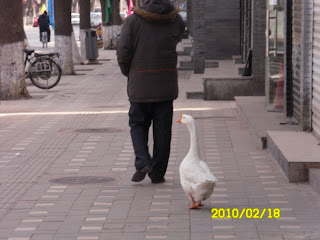 Thursday morning the weather was warming up and the wind was much calmer than the day before when we were taking the Beijing tour. On our way to eat breakfast we saw this gentlemen out walking his pet goose down the sidewalk. We have seen many dogs, most wearing coats, one cat under a car trying to stay warm and even a pet chicken just outside the gate of the house where it lives. We walked on past the goose and for a short time it looked like it wanted to follow us. We walked down to the local Wu-Mart after breakfast just to look around and pick-up a few snacks to keep at the hotel. Later that night we went to an acrobatic show. We arrived early and met two young ladies named Sara and Holly from the states who are teachers in Korea visiting Beijing during Spring Festival. 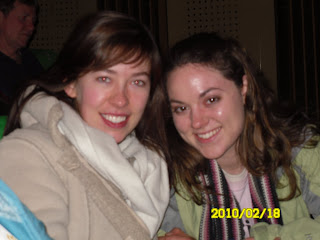 The theatre soon was filled and the show began. We all really enjoyed the show. Even DJ only took a nap during intermission so she wouldn't miss anything. Suzanne liked the guys clinbing the two tall poles and the way they jumped from one to the other because it looked like they some how turned off the gravity for that part. The whole performance was excellent. After the show we took a taxi to an American style restraunt called Grandma's Kitchen which is the only place we have found that has Suzanne's beloved rootbeer soda. We are going to TJ and Jenni's apartment friday and then out at night to snack street.
at February 18, 2010