Flowers, birds and a dog. 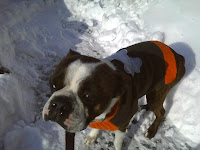 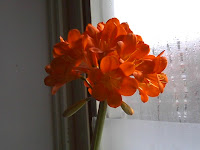 Spot is here and Spring is on the way. The flowers are blooming in a classroom at the public school and on the way into the school I heard the first birds since our arrival in China. There is a holiday coming up in the middle of April which is similar to America's Memorial Day. Hopefully all the snow will be melted by then. Spot had a pretty rough trip. He got locked in a cage and dropped-off at an airport and after a long trip to Beijing was left in a freezing warehouse for a day and a half. Then he was taken to quarantine where they barely fed him and never let him out of the cage. Finally he was placed on another plane and put into the trunk of a taxi before he finally got to be released from the cage and saw his family again. He was very dirty and tired besides having lost some weight but at least he is home and we all feel better now that he is.
at March 16, 2010