While I was teaching Saturday, the family went shopping and Suzanne purchased some boots in the underground. After school, we all went out to buy some groceries at Fu-Mart. We went into New-Mart, accessed the underground there and only went half a block before we were lost and came up to see where we were. While waiting for Suzanne to finish here ice cream we got in the underground, there were two Chinese ladies that came out of the underground, looked around and then went back in, as though they were lost and were trying to find out where they were just like we had done. They say the U.S. is very service centered. This city in China seems to have mostly two things that drive the economy, selling things and buying things. In the downtown area in the building my school is in there is a six story mall including a supermarket in the basement. The mall is called New-Mart and from the basement you can go through tunnels into the underground which goes in all directions for a radius of three city blocks. The whole underground tunnels are filled with stalls selling everything. I saw a section as big as a super Wal-Mart back in the states selling nothing but shoes of all kinds. One block away from New-Mart is an underground store called Fu-Mart with a bigger market that we like to go to once a week. After we got our bearings, we headed back into the underground and crossed under the busy road to come up again. This time we stayed above ground. All along the streets are vendors selling all kinds of things including food. If you look in this first picture; we are at the NW corner of New-Mart and to the right is a KFC and across the road is another KFC. Fu-Mart is across the road and to the left. 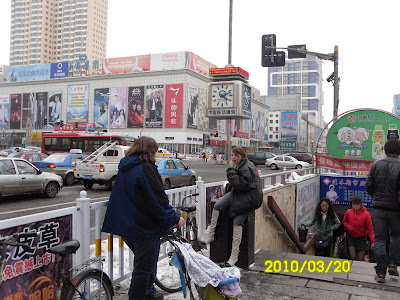 There are also department stores and small shops everywhere along the streets and alleys. We went into the building with all the pictures on it that you see in the first picture. It is another huge, five story mall. That makes three large shopping areas in a radius of one city block, all surrounded by smaller stores and shops, with the streets above lined with venders and tunnels below filled with stalls. If people aren't working at one of these places selling something, they seem to be buying stuff from another place. Of course there is the food stalls and venders that are mixed in everywhere. This second picture is from the top floor of the other mall we found. 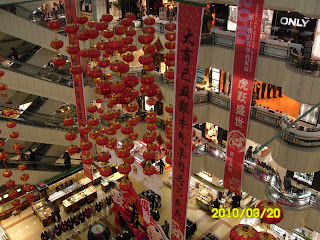