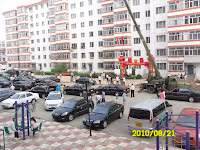 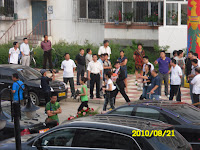 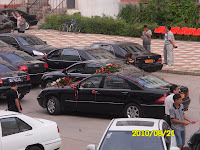 Certain days are lucky to get married. Last week had one of those days. It was the 16th day of the 8th month on the solar calendar and the 7th day of the 7th month on the lunar calendar. Today I woke to find a small crane outside the front of our building across the parking lot. It was doing the most important work that a crane can do in China; holding up a large amount of firecrackers for a wedding. This turned out to be the grooms home. We watched the crowds of people and black cars decorated in red streamers and flowers. Soon the groom came out and the wedding precession left, while some people stayed behind to set-up more fireworks. After some time the groom returned with his bride and the fireworks were lit. Not long after we got here we saw a wedding out back of our building that was the counterpart to this part of the ritual. It was were the groom came to collect his bride to take home. Both parts have the precession and firecrackers and some sort of decoration. When the groom shows up to get the bride he must argue with the bridesmaids to prove his honorable intentions. After the bride and groom return to his home they soon leave again to start the wedding banquet, which is sometimes more important than the ceremony. As I understand it, the ceremony varies and is a minor part of the wedding, although I have never witnessed one myself. After night fall the final part of the wedding is the burning of  money to honor the spirits of the ancestors. We can see this sort of thing all over the city and is done by the main roads so everyone can witness.

"Spirit money is most often used for ancestor veneration but has also been known to be used for other purposes such as a gift from a groom's family to the bride's ancestors. Spirit money has been said to have been given for the purpose of enabling their deceased family members to have all they will need or want in the afterlife. It has also been noted that these offerings have been given as a bribe to Yanluo to hold their ancestors for a shorter period of time."