A 6 kilometer walk to the southwest side of the city.

We are getting out and exploring the city again now that summer is here. This is the Jiamusi Hotel. The name of the hotel is on the front in Chinese, English and Russian.

Many places of business start the day with the employees either marching, singing or dancing in front of the store or restaurant.

This is a restaurant across from No.1 high school.

This is looking east along a tree lines road.

Looking at the park across from the Jiamusi Hotel.

I thought I would include some pictures of some of the kinds of transportation they use around here. This is a motorcycle converted to act as a kind of small taxi. There is much government regulations on these so prices per trip are negotiable.

Here is another version that is a little longer.

There are also motorcycles that are converted to small trucks.

This a lady peddling a bike cart. It looks like she is selling baked sweet potatoes or something.

There are lots of city buses and tour buses around town. There are even some double-decker buses. You can get a better look at the bike cart in the foreground.

No.1 high school. The two colors of flowers are arranged to say something in Chinese. The way the public schools work in this city is that students are placed in schools according to their test scores. The better the score, the better the school. The students can be placed in the better classes in a school if their parents give money for placement preferrence. No.1 high school has the most students with the highest scores to enter college.

No.1 high school campus is really big and nice.

I don't teach at No.1 high school but I do have several students in a class at Ivy that attend No.1. They are the students we had over to the apartment last week.

A closer look at the motorcycle truck.

There are also pull carts.

You can see a small electric three-wheeled scooter. You can also see a worker waiting for employment. There are numberous places in the city where people who are unemployed wait with the tools of their trade or trades and signs advertising to passerbys what they can do in hopes for employment.

The only Good Year store we have seen here.

This is at the end of a road in a very nice gated community. The streets are lined with various shops.

Here are some ladys playing cards in front of one of the stores. Right next door to this store was a  Mahjong house.

This little boy wanted to pet Spot but the mother told him that dogs are dirty and he shouldn't touch. This is a commun view here.

This is looking back to the north along a very busy road on the west edge of the city.

Here is a big round-about at the southwest corner of the city.

You can just make out the mountains to the southwest through the city haze.

Jiamusi University is a large university and popular with locals and many foreigners from all over the world. The university is on the southwest side of the city. This is the university's football (soccer) stadium.

Another view of the mountain in the distance.

This hill is next to the stadium and part of the campus.

This is looking to the east along the northern edge of the university. You can see the guy on the scooter looking back at us. This kind of thing happens everywhere we go.

Deb checking out the stadium.

Spot was very tired after our long walk.

It was nice to rest at the park next to the stadium.

There were several students relaxing or studing in the park.

Construction is everywhere in the city, but especially in this part of the city. The area where all the cranes are building are shown Google Earth as nothing but old one level small homes.

Looking at the mountains from the pavilion on the hill top. 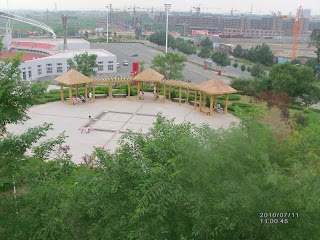 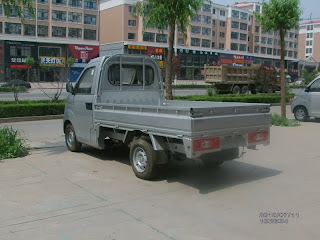 I would like to go visit the large building in the distance and find out what it is. 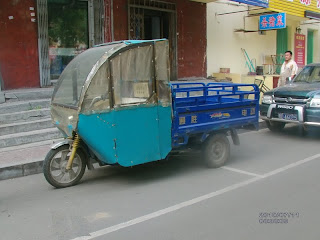 The government banned rickshas pulled by people except in high tourist areas, so now they are peddle powered. If you don't have your own car, there are four kinds of transportation available not counting bicycles: taxi, bus, ricksha or walk. How you get around depends of how far you are going, how much you want to spend, the weather, whats available and how much time you have. Many people will take a variety of modes of transportation. The rickshas are enclosed during the winter and have plastic to go over the tops during the rain. 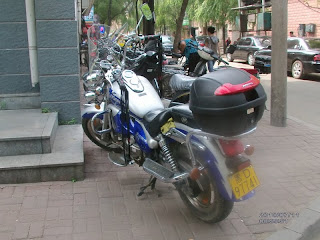 Sometimes they actually use a motorcyle as a motorcycle. 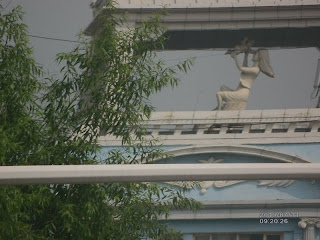 I was this on top of a building a little over a block away and thought it was nice. 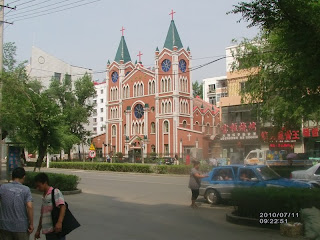 There are four christian churchs in the city. This one has sevrvices on tuesday, wednesday and friday with one of them in English. We have not been yet, but have gotten some dual language bibles for some Chinese friends from this church. 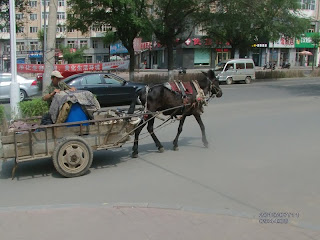 There are some horse or donkey pulled carts around town. 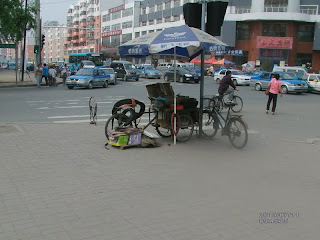 Because there are so many bicycles, you can find several places where people have set-up shop to repair bicycles. 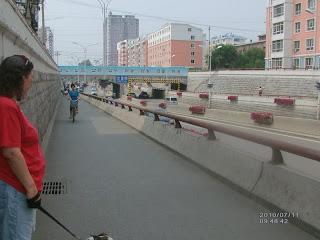 At one point we had to go under the train tracks connecting to the northern part of the province from Jiamusi. We saw two trains while going this way, but didn't get a picture. 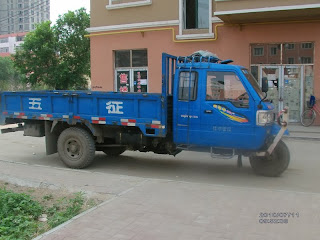 Here is a three-wheeled truck that is powered by a very unique engine that makes a noise that sounds like it is saying 'tug, tug, tug'. The "tug's" come in a variety of sizes and really are a workhorse. 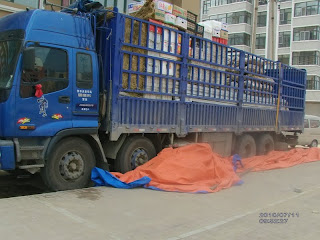 This is the Chinese version of an 18-wheeler. 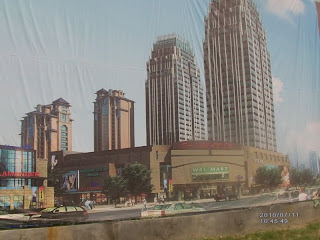 This banner shows what an area that is under construction should look like when complete, including a Wal-Mart.
at July 11, 2011