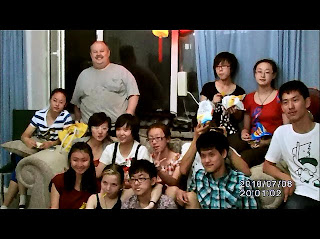 These are some of the high school students from Ivy. Today was there last day of school and I invited them over to our apartment for an end of the year movie party.

Everyone had a great time and I was very happy to have them come over.

They all brought something to snack on during the movie.

This is Joy and Susan. They have become friends.

The girls surrounded DJ. This is usual anywhere we go with DJ. 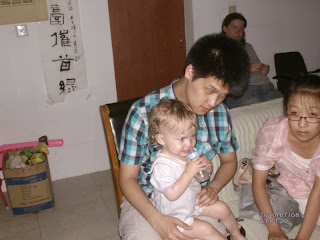 DJ wasn't too thrilled to be sitting in Teddy's lap. 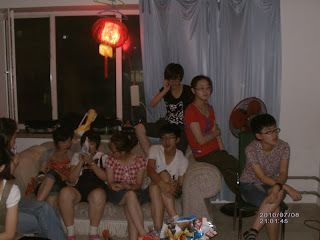 There were 14 students in all. 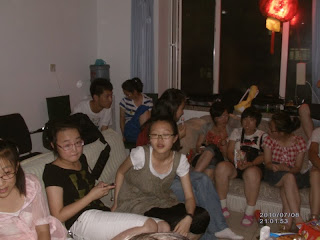 Some were from my class and others were from other classes at Ivy.
Some of the students they came were not used to dogs and weren't sure what to make of him.
We will have to get together again and play some games next time.

Earlier in the day, the Ivy teachers went to a lunch hosted by the director, Mei Han.

The lunch was a welcome for one of Ivy's foreign directors from London, who is visiting during the summer. The beauty on the left is the London director. Her name English name is Tina. She has two girls, about two and four years old. We will have to arrange a play date for them and DJ. The other beauty is of course Mei, who thinks she is 'no beautiful'.

This is Roxanne. Roxanne is from South Africa and Scotland. She just started with Ivy, but is on break until the end of summer. George and Connie were able to make the lunch also, but Andrea and David were busy.

It was a large spread as usual. I will start with the peanuts at the bottom right and go counter clockwise to tell you what everything is. After the peanuts is some broccoli with peppers, mushrooms and shrimp. Next is some kind of rib. Then there is fried shrimp. After the shrimp is a kind of cold salad. That is followed by some fried chicken. Next is a cold spinach salad. Then there is some seasoned beef. The plate after the beef has several different kinds of stuffed pastry. And after the pastry are some stuffed pastry balls. Finally, there is a glazed pork and eggplant dish.
at July 08, 2011