Is change a good thing? 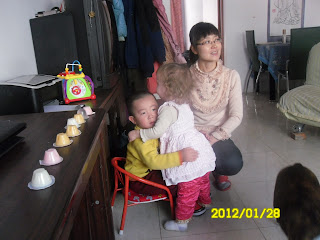 Change can be a good thing, and sometimes it can’t be. Carl and I had gotten jobs, and accepted them for a high school in Quzhou,China. That was ok, it would be in a warmer climate, few hours, not all that far from Shanghai. It took us awhile to get all of the plans done right on how to get to Quzhou. When Carl finally found out that he wasn’t going to be able to leave until after his classes on the 19th, then we could plan some better. We finally figured out that where we were going, when we could leave, and when the Visa would expire, there was only one option--fly. We got our tickets booked online, which took some doing also. During this time, the last school,IVY, had turned off our Internet at our house. I had to get a Chinese friend to help me find a place to go and fix the plane tickets to make sure we had everything right. Then after we had it all planned, we were just killing time waiting. During this time, we were also getting rid of things to people who could use them. DJ was also able to have a last play date with her friend Mike. They both had fun doing things. It was at that point that the school started telling us that we might have to stop at their school in Beijing, so that they could do our Visa’s. Then it was maybe you might want to work there, and then finally it was you aren’t going to Quzhou, you will go to Beijing. Since we are going to be working in Beijing instead, they say they are going to give us more money. When things finally changed to us going to Beijing finally, then I had to change all the tickets etc. During this time, I was also working on getting things done with Spot, to make sure that he would come with us safely. There was allot of work that went into getting everything done in time, and correctly. I am very glad that I wasn’t working then, things might not have gotten done so fast.

Now, we have changed plans and know what is going on now. What will the next adventure be?
at March 04, 2012